The Aim of this Code of Flying is to ensure safe and enjoyable flying for members of the club and to minimise any risk or annoyance to others.

When not actually filling or draining fuel , then please keep containers closed. On a warm day an open fuel container can spread fumes over many feet, and these fumes are surprisingly easy to ignite and very difficult to extinguish once lit. 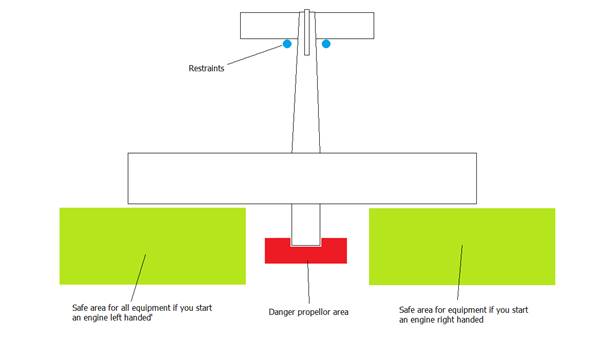 o    R = Rate switches are in the correct position?

  LiPo batteries should be treated with respect at all times; especially during the charging phase (indeed it is recommended that LiPo batteries be charged in a fire proof container). Inspect LiPo batteries regularly for deformation and dispose of correctly if you are in doubt as to the integrity of the battery. As battery sizes grow to meet the need of larger and larger models, this safety point will become ever more important

  It is good practice to have a separate power supply for the Rx and servos, rather than use the flight battery for both power and radio

  While it is OK to arm your model for pre-flight checks in the pits, it is advisable to then disarm it for the walk to the flight line and final re-arm immediately prior to take-off. After collecting the model, disarm the motor for the walk back to the pits. Where this is not practicable then a throttle cut switch shall be utilised to prevent the motor starting inadvertently. After collecting the model, disarm the motor or activate a throttle cut before walking back to the pits. Once an electric model has been armed/battery connected, it should be treated in the same manner as a running nitro model. I.E. it should be restrained when in the pits area and when being carried down to the patch, should be carried with the propeller clear and pointing away from others and yourself.

Public Footpaths and Presence of Members of the Public

It is a club requirement that you are registered with the CAA for DMARES (Drone, Model Aircraft Registration and Education Scheme).

Once registered you will be issued an ‘Operator ID’ which must be located on each model.

There is no requirement to obtain a ‘Flyer ID’ as this will be covered once your have passed the BMFA ‘A’ test which the club will help you through.